Whitinsville, MA (March 13, 2017) – In preparation for the annual spring cleanup season, Blackstone Heritage Corridor, Inc. (BHC) reached out to each community within the National Heritage Corridor and has a couple of exciting new additions this year. For starters, the Town of Uxbridge is kicking off the 2017 cleanup season with a town-wide cleanup on Saturday, April 1 from 9 a.m. to Noon.

“The Uxbridge community came together very quickly on this one,” noted Bonnie Combs, Marketing Director at BHC, who also manages its Trash Responsibly™ program. “The Board of Health and DPW were very supportive, as well as Boy Scout Troop 25, Koopman Lumber, Premeer Real Estate, and First Night Uxbridge, Inc., which is providing free hot dogs to all volunteers. Premeer Real Estate is providing music and entertainment and is debuting its new Green Team, and Koopman Lumber has donated trash bags. The celebration starts and ends on the Town Common, in the heart of Uxbridge. Volunteers can register in advance and select a street at tinyurl.com/UxbridgeCleanup.”

In preparation for its 350th Anniversary this year, the town of Mendon, MA, is hosting its community cleanup on Saturday, April 8 from 9 a.m. to Noon, meeting at the Clough School. Volunteers will be treated to a free lunch, compliments of the Mendon Lions Club, and Southwick’s Zoo is giving volunteers a coupon for a free admission to the zoo. “The momentum is building in Mendon after last year’s cleanup where over 75 volunteers came out,” noted Combs. “We’re pleased to see such enthusiasm from the community to keep it clean.” Volunteers can register and select a street at www.Mendonma.gov/cleanup.

April 8 is also a busy day in Worcester, MA, where the Regional Environmental Council hosts its 28th Annual Earth Day Cleanup from 8 a.m. to Noon. According to organizers, this is a city-wide cleanup of parks, gardens, and neighborhoods involving more than 1,000 volunteers who will pick up more than 50 tons of trash at more than 60 locations throughout Worcester. The same day, the Ten Mile River Watershed Council is hosting its Earth Day Cleanup at Slater Park in Pawtucket, RI. Volunteers will meet at 9 a.m. and will disperse along the Ten Mile River. April 8 is also “Yellow Bag Day” in the Town of Cumberland, RI, and is presented by The Valley Breeze. Residents can pick up yellow trash bags ahead of time from The Valley Breeze office in Lincoln and the town collects the bags the following Monday… Click Here to continue reading full press release.

Whitinsville, MA (March 8, 2017) – Important historical documents and artifacts in Hopedale, MA, have been successfully archived thanks to a Partnership Grant from Blackstone Heritage Corridor, Inc. (BHC). The Grant was awarded to the Hopedale Historical Commission and allowed the Little Red Shop Museum to properly preserve a collection of artifacts, documents and photos.
“The proper cataloging and display of these important materials will help us to better tell Hopedale’s story,” explained Sue Ciaramicoli, curator at The Little Red Shop Museum. “This includes Hopedale’s role in the industrialization of America, and the town’s rich history told through the public lives of a number of prominent Hopedale families whose impact was felt far beyond Hopedale.”

An added benefit of the grant, Ciaramicoli noted, is that it helped create interest in the project from the community. “Many new partners and volunteers came forward which made a significant impact,” Ciaramicoli added. “We grew from a team of four to a team of 12 volunteers, and even more continue to join us.”

BHC provided $3,725 in grant funds and was matched by cash, in-kind donations and volunteer time. Funds from the BHC portion allowed for the purchase of archiving equipment and the storage of a loom which was removed from the Museum to allow more space for the cataloging project. The Grant helped cover storage fees until the loom could reach its final destination at the Noble & Cooley Center for Historic Preservation (NCCHP) in Granville, MA. Local companies including Howe’s Welding and G&U Logistix helped with the trucking and logistics in addition to NCCHP.

According to Ciaramicoli, the temporary storage of the loom prevented it from being scrapped. “Now it is safely housed at NCCHP with the other six Draper power looms that were moved there in 2015. Collectively, they can continue to tell the story and link back to Hopedale.”
In addition to the need to scan photos and documents and catalogue them, a bookcase was needed to allow the Museum to properly store showcase important artifacts. E.W. Tarca Construction built and donated a custom bookcase.

“This grant was a catalyst,” Ciaramicoli remarked. “It brought life back to this museum and revitalized its mission. We are better able to tell the important story of Hopedale, which is why it was included in the new National Historical Park.”
The Hopedale Village Historic District was identified as one of the “nodes” of the Blackstone River Valley National Historical Park. Established in 2014, the new Park will help preserve, protect and interpret the nationally significant resources that exemplify the industrial heritage of the Blackstone River Valley.

BHC Executive Director Charlene Perkins Cutler applauded the work. “While there is much work to do before the vision of the Park comes to life, BHC was pleased to provide Partnership Grant funding to the Hopedale Historical Commission to accomplish their important work, and assist Hopedale as it becomes part of the new National Historical Park.”
About Blackstone Heritage Corridor, Inc.:

Volunteering in the Valley 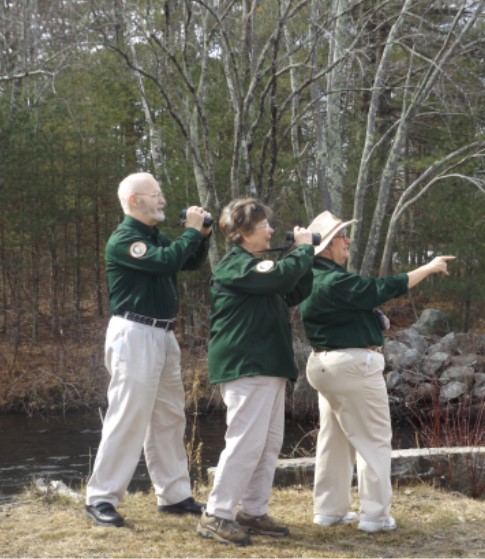 The weekend bird walks will fall on Saturdays and Sundays between April 23 and June 4 and will run from 8:00 to 10:00 a.m. The walks are led by BHC’s Volunteers-in-Parks program members Rosanne Sherry of N. Smithfield, RI, and Beth and Paul Milke of Uxbridge, MA. The three of them met during a bird walk program last fall and are collaborating on this new program and other events throughout the year.

Birding on the Blackstone kicks off on Sunday, April 23 along the Blackstone River Bikeway in Blackstone River State Park in Lincoln, RI. The walk begins at the I-295 Visitors
Center in Lincoln and is led by Rosanne Sherry. Participants will watch for territorial activity and early nest building. On Saturday, April 29, Beth & Paul Milke lead a bird walk at River Bend Farm at the Blackstone River & Canal Heritage State Park, 287 Oak Street, Uxbridge, MA. The Milkes will take birders along the field and woodland edges of the farm looking for bird species that usually arrive in early spring such as Eastern Phoebe, Tree Swallow, Chipping Sparrow, Eastern Towhee and possibly Yellow-Rumped Warbler. On Sunday, April 30, Rosanne returns to the Blackstone River Bikeway in Lincoln, RI, when she expects migration and nesting will be in full swing. “Baltimore Orioles and Rose-Breasted Grosebeaks may be in the area,” she predicts. “We’ll likely see Red-Winged Blackbirds and Common Grackles fighting for territory in the marsh area under Route 295.”

On Sunday, May 7, Rosanne, Beth and Paul join together at the new Blackstone River Greenway, meeting at the Blackstone, MA, parking lot on Canal Street. This is the first official bird walk on the newly completed section of the Greenway. The trio will lead walkers to search for Bald Eagles, water birds, and song birds. On Sunday, May 21, Rosanne travels to a new location at the Ten Mile River Greenway in Pawtucket, RI, where birders will meet her at the parking lot by the Loof Carousel in Slater Park. According to Rosanne, the river is calm in this location and birders may see many Warblers and other land birds in the woodland and marshes. “We’ll look and listen for Common Yellowthroat, Carolina Wren and Eastern Bluebirds,” she notes. On Saturday, May 27, Rosanne, Beth and Paul meet up at River Bend Farm again in Uxbridge, MA, to take birders out to the fields where the trio expects participants will view Orioles, Flycatchers, Grosbeaks and Warblers. “There’s a chance we’ll also hear and see Black-billed Cuckoo and Indigo Bunting, too!” they announced.

On Saturday, June 3, the Milkes will take birders to West Hill Dam and Park in Uxbridge (518 E. Hartford Ave.). “The West Hill Park walk will take us from the top of the dam, over the river and through the woods to survey birds on the park’s reclaimed grassland,” Beth notes. “We’ll hope to find Prairie Warbler, Indigo Bunting, Eastern Towhee, and Field Sparrow. Warbling Vireos should be calling near the marsh where we’ll look for Wood Ducks and Great Blue Herons.” The spring birding series concludes on Sunday, June 4, at the Blackstone River Bikeway in Lincoln, RI, with Rosanne, who predicts the walk may be quiet as birds nest or feed their young, but that the group will look for signs of productivity. “We will follow up on the Eastern Phoebe and the Northern Rough-Wing Swallow who nest near the foot bridges,” she points out. “American Robin and Gray Catbird nests may be spotted, and we may even see who is fishing in the river.”
According to Suzanne Buchanan, Volunteer Coordinator at BHC, this program speaks volumes about the possibilities for volunteers who join the program. “Rosanne came forward over a year ago, expressing interest in offering bird walks to share her knowledge and passion for birding,” she explains. “After her first series in Rhode Island along the Blackstone River Bikeway, she created one at River Bend Farm in Uxbridge, MA, that fall and that is where she met Beth and Paul Milke. It was kismet. The three have become great friends and plan programs together. Whatever skill or interest you have, chances are we can find an opportunity for you to share that through our Volunteers-in-Parks program.”

To participate in one of the scheduled bird walks in Rhode Island, register at BlackstoneBirds@gmail.com or call BHC at 508-234-4242. To register for one of the bird walks in Massachusetts, email BlackstoneBirdsMA@gmail.com or call River Bend Farm at 508-278-7604. Further directions will be sent upon registration. If there is rain at the time of the program, it is canceled. Binoculars and field guides are suggested. Children 12 years and older are welcome on all programs. A complimentary Blackstone Valley Adventure Pack will be given to those who pre-register, while supplies last. All walks are listed on BHC’s events page at BlackstoneHeritageCorridor.org/events.

The Birding the Blackstone program is presented by BHC in partnership with the National Park Service Volunteers-in-Parks, Rhode Island Department of Environmental Management (RI DEM), and Massachusetts Department of Conservation and Recreation (MA DCR).