“A new bicycle repair station along the Blackstone River Bikeway in Worcester will not only help cyclists who need to pump some extra air in their tires, but provides necessary infrastructure as local officials work to increase the amount of cycling from Worcester to Providence.”

MassLive.com has a great article about event here.

Looking for information?  Need a map? 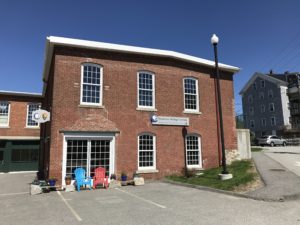 Want to stamp your NPS passport?  Need a new hat?

If you’re looking for ideas on how to Get Lost in the Blackstone Valley, or planning on where to GO!, drop in for assistance or ideas.

Saturday morning is a great time for travellers and trekkers, as well as vacationers and valleyites to stop by and get all the maps and guides for exploring the Blackstone River Valley National Heritage Corridor! 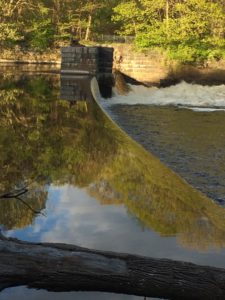 started out gray , overcast and dreary – wasn’t looking too great for a bike ride . However, as the afternoon went on the sun eventually came out just in time to warm us a bit on our bikes and provide a spectacular pink and gold sunset after the bike ride.  Wildlife abounded, muskrats, mallards and a blue heron – Oh My!  We also learned many interesting things from Mark Dennen , especially about the rock formations along the way.

Woonsocket is the start of next week’s Bikeway Patrol ride. As you pull in to the driveway for the bikeway, notice the veteran’s monument and the old smokestack from the Glendale Mill. The land once owned by them has been repurposed into soccer fields and a mini golf course. We will be riding to Manville where you can find a kayak/canoe launch to the Blackstone River at Sycamore landing. Friends of the Blackstone claim this as their landing spot and will be having a monthly meeting at the environmental center there.  Come join us as we explore the history and current events happening in this vibrant wooded corridor!

mdiprete@BlackstoneHeritageCorridor.org
BHC Gears Up to Celebrate National Bike Month in May
Festivities Include Bike Rack and Repair Station Installations and Launch of Bikeway Patrol Rides

Whitinsville, MA (May 12, 2017) – Blackstone Heritage Corridor, Inc. (BHC) is celebrating National Bike Month in May with a series of bike rack and repair station installations and the launch of its Blackstone River Bikeway Patrol, which offers group rides with the public as well as information and assistance along the Bikeway.
Beginning this month, a total of 58 bicycle racks will be installed in the Massachusetts communities of Auburn, Blackstone, Douglas, Grafton, Hopedale, Leicester, Millville, Upton and Uxbridge. In addition, Fix It bicycle repair stations will be installed in Auburn, Grafton and Leicester. These racks and repair stations were made available through a state grant. Douglas is the first community to report having them installed in downtown areas, near the Library, near the town offices and at local recreation fields.

Whitinsville, MA (May 10, 2017)- Blackstone Heritage Corridor, Inc. (BHC) celebrated National Volunteer Week with its volunteers at Southwick’s Zoo in Mendon, MA, with a behind-the-scenes tour led by Betsey Brewer Bethel, executive director of Earth Limited at the zoo.
BHC manages the Volunteers-in-Parks (VIP) program for the National Park Service and currently has 197 active volunteers. Over the past year, a total of 1,274 volunteers participated in the program, including single-day service events. In fiscal year 2016, volunteers served a total of 13,431 hours contributing a value of $316,440 in volunteer services to the organization. Since moving its office to Whitinsville, MA, from Woonsocket, RI, one year ago, BHC’s Volunteers-in-
Parks program has grown considerably, both in number of volunteers and new programs led by those volunteers.
One of the new volunteer-led programs is the Blackstone Heritage Corridor Trail Ambassadors. According to BHC’s Volunteer Coordinator, Suzanne Buchanan, this new program complements the Blackstone Valley Paddle Club, now in its 17th season, and the Blackstone River Bikeway Patrol, now in its sixth season. “We have had the good fortune of providing volunteer programs offering recreation on our rivers and our bikeways, and now we have one for our beautiful trails,” explained Buchanan. More than a dozen people responded to Buchanan’s call for interested VIP’s. A schedule of more than a dozen hikes, walks and events through the end of 2017 is still growing and is posted on the events page of BHC’s website.
Meanwhile, BHC’s Birding on the Blackstone series has expanded this year. First introduced by VIP Rosanne Sherry in 2016, the program grew once she met Beth and Paul Milke on one of her walks. Now the trio have worked out a schedule offering bird walks throughout the Corridor through June 4. Other new volunteers have come forward offering their skills in photography, graphic design, assisting with BHC’s Trash Responsibly™ program, and much more.
“Volunteers are the backbone of stewardship throughout the National Heritage Corridor and it’s a pleasure to watch BHC’s volunteer program grow and flourish,” noted Megan DiPrete, BHC’s new Executive Director. “There is certainly a range of new energy being directed in many exciting directions.”
The volunteer appreciation event also served as a time to recognize the VIPs for some milestones for their years of service in the program. Recognized for five years: Mark Dennen of Lincoln, RI, who volunteers with the Blackstone River Bikeway Patrol and is also certified to teach CPR and First Aid to BHC’s volunteers. Recognized for serving 15 years: Julie Riendeau of Harrisville, RI, who volunteers with the Blackstone Valley Paddle Club and also brings the Junior Ranger program to area schools. Also serving 15 years, and with the Blackstone Valley Paddle Club are Steve Riendeau of Harrisville, RI, Ben Thompson and Cheryl Thompson, both of N. Scituate, RI; Lee Parham of Norton, MA, and Robert Martin of Cumberland, RI. Keith Hainley of
Woonsocket, RI, and Judy Hadley of Lincoln, RI, have both served 15 years as members of the Blackstone River Watershed Council/Friends of the Blackstone. Hainley serves as its environmental coordinator, leading cleanups along the Blackstone and the Rhode Island section of the Blackstone River watershed and Hadley serves on its board and creates public programming for the organization. Nancy Weigmont of Woonsocket, RI, and Robert Taylor, of N. Attleboro, MA, both reached their 15 year milestone and both volunteer at the Museum of Work and Culture in Woonsocket, RI. Kent Cameron of Warwick, RI, was also recognized for his 15 year volunteer milestone.
During BHC’s National Volunteer Week celebration, those recognized for volunteering for 20 years including Ethel Halsey of Harrisville, RI, Irene Blais of Woonsocket, RI, and Robert Charpentier of Harrisville, RI. Blais volunteers regularly at the Museum of Work and Culture and is president of the Woonsocket Historical Society and Charpentier has been a fixture with the Blackstone River Watershed Council/Friends of the Blackstone and serves on its board.
To learn more about BHC’s volunteer program, attend the next Volunteer Open House on Thursday, June 8, 2017 at 6:30 p.m. at the Museum of Work and Culture, 42 S. Main Street, Woonsocket, RI, or call Suzanne Buchanan at (508) 234-4242. To learn more about BHC visit BlackstoneHeritageCorridor.org.
About Blackstone Heritage Corridor, Inc.:
An energetic nonprofit, the Blackstone Heritage Corridor, Inc. partners with organizations, local communities, businesses and residents to ensure the long term vitality of the Blackstone River Valley National Heritage Corridor. Learn more at BlackstoneHeritageCorridor.org.
####

Request for Qualifications – Design of Exhibits  – Click for Proposal PDF

Blackstone Heritage Corridor Visitor Center at Worcester
May 2, 2017
BHC seeks qualifications from companies interested in developing content, fabricating and
installing exhibits for the Blackstone Heritage Corridor Visitor Center @ Worcester, under
construction off McKeon Road, Worcester, MA.
Review Process:
BHC anticipates a swift review process. It is anticipated that contractors will be prequalified
by May 19, 2017 or sooner, that bidding will follow immediately thereafter, that a
bid will be accepted and a contract executed by approximately June 30, 2017.
Submission:
Qualifications must be submitted in a single PDF document less than 5 MB. Submit
qualifications by email to DKurtz@BlackstoneHeritageCorridor.org. Proposals are due no
later than 10:00 a.m. Eastern Time on Monday, May 15, 2017 All submissions will receive
an acknowledgement of submittal, generally within 24 hours, sent via “reply” to the
submission.