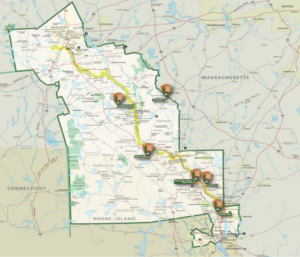 With the full support of the Congressional delegations from Massachusetts and Rhode Island, Senate Bill 1942, known as the National Heritage Area Act, was approved by Congress and sent to President Joe Biden for his signature. The bill passed the House on December 22, 2022, by a bipartisan vote of 326 yes and 95 no. Thanks to the leadership of Congressman Jim McGovern, House Rules Committee Chair, no Democrat voted against the measure, and a majority of Republican House members supported the bill.

The Blackstone River Valley National Heritage Corridor, which spans 25 communities from Worcester, Massachusetts, to Providence, Rhode Island, was first established in 1986 and recently observed its 36th birthday. While the passage of S.1942 continues to make Blackstone eligible for federal funding, appropriations for the Corridor have declined in recent years.

There are currently 55 national heritage areas across the United States and four others in Massachusetts – Essex, Freedom’s Way, Last Green Valley, and Upper Housatonic. With the passage of S.1942, 45 NHAs have been extended for 15 years (through September 30, 2037), seven new NHAs were designated, and robust protection for private property rights was included.

The Blackstone River, the spine of the Corridor, is so much cleaner today than it has been in many years, with dramatic reductions in pollution. Paddlers now have 17 put-ins to access the scenic beauty of the river. The well-used Blackstone River Bikeway/Greenway between Worcester and Providence is nearly half complete. BHC, Inc. is coordinating efforts in both states to finish the project. These natural byways are tremendous assets to the quality of life of Valley communities. Our many programs provide paddling and biking experiences for people of all ages and abilities.

BHC tells an unmatched story of cultural evolution in partnership with dozens of local organizations and communities. Through wayfinding signs, interpretive panels, brochures, exhibits, and five heritage centers, BHC recognizes the past and points us to the future.

BHC was a driving force behind the creation of the Blackstone River Valley National Historical Park, one of our country’s newest national parks. This unique Park celebrates the story of innovation that literally changed how people worked and lived from the earliest days of the country to the present day. BHC manages the Park’s award-winning Volunteers-In-Parks program and is the only federally-designated partner to the new Park, which is based at the Old Slater Mill National Historic Landmark in Pawtucket, RI. To learn more about the BHC, visit blackstoneheritagecorridor.org.