A Special Screening of Pakachoag: Where the River Bends with a presentation by Colin Novick of the Greater Worcester Land Trust & Cheryll Toney Holley, Leader of the Hassanamisco band of the Nipmuc Nation. Discussion and questions will follow the video.

The Blackstone River Watershed Association (BRWA) is offering this Annual Meeting presentation with a virtual option. Please indicate if you will be attending virtually when you register.

Packachoag: Where the River Bends is a film documentary that explores the history and identity of Pakachoag, the largest of three Nipmuc Villages that make up present-day Worcester. Pakachoag centers on the large hill in South Worcester that is now also the site of the College of the Holy Cross, Quinsigamond Village, and part of Auburn. The film explores the area before, during, and after colonial contact, including how the growth of Holy Cross has engaged with and erased that history. Produced by a team of professors and creatives at Holy Cross in collaboration with the Greater Worcester Land Trust, the film describes the connection of the Nipmuc people to the land of Packachoag Hill and to the Blackstone River that bends around it.

Viewers are led on a walking tour of important Nipmuc sites such as Pakachoag Spring, and “Kattatuck”, the original name of the Blackstone River. Thomas Doughton (Nipmuc), Senior Lecturer at Holy Cross in its Center for Interdisciplinary Studies, and Colin Novick, environmental historian, and Executive Director of the Greater Worcester Land Trust, lead the tour. Cheryll Toney Holley, Leader of the Hassanamisco Band of Nipmuc, gives testimony to the Nipmuc presence in the Blackstone Valley today.

The 45-minute film will be shown at 7:00 PM on Wednesday, May 18 in Community Rooms A and B of the Grafton Public Library and will be followed by an opportunity for questions and discussion with Colin Novick and Cheryll Toney Holley.

A brief business meeting will precede the presentation at 6:30 PM for the election of officers, to welcome new members of the Board of Directors along with all members of the Blackstone River Watershed Association. 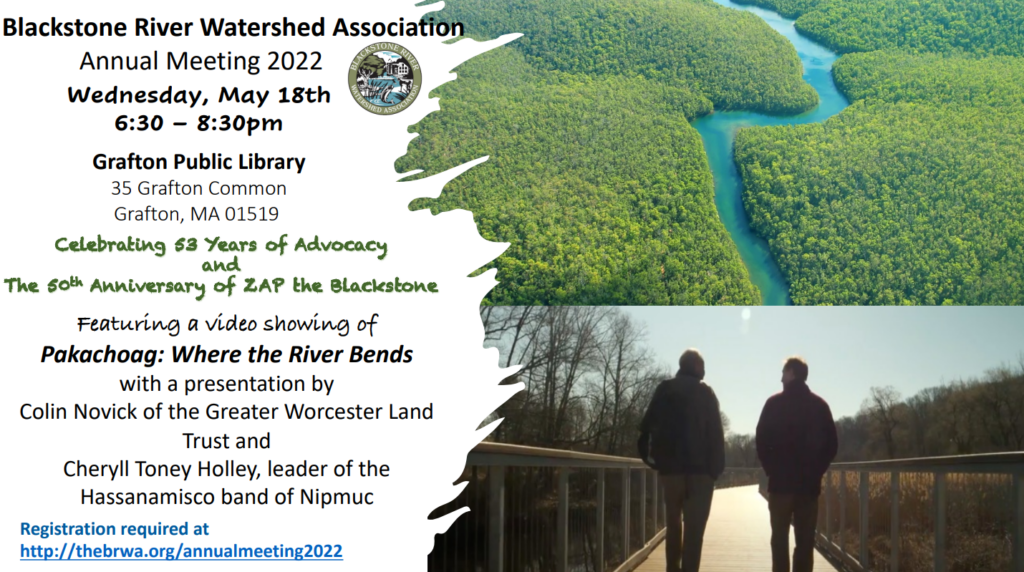