On Wednesday, October 7 at 7pm, the Museum of Work & Culture will host journalist Patrick White for “The Exodus of French Canadians to New England : the Story Behind the Story,” a free talk via Zoom.

White’s talk will deal with the wave of emigration of French Canadians to New England, from 1840 to 1930. He will discuss the situation in Quebec that brought on this mass emigration of French-Canadians to the United States and the impact that this had on the six New England states. He will also talk about the French-Canadians fight to preserve their language and culture in the context of Melting Pot and assimilation.

The talk will begin at 7pm and will be held on Zoom. Please register for the talk by emailing mowc@rihs.org.

White is a professor of journalism at the University of Quebec at Montreal (UQAM). He has also founded the Quebec edition of Huffington Post (HuffPost Québec) and managed it from 2011 to 2018. Prior to that, White was chief news editor of Canada’s largest news portal (Canoe.ca); chief news editor at the Quebec City daily Le Journal de Québec; deputy chief news editor at The Canadian Press news agency, as well as Reuters correspondent for seven years and field producer for the CTV National News in Quebec City. He has a M.A. in political science from Laval University and a B.A. on communications (journalism) from Laval University.

The event is organized in collaboration with The Québec Delegation in Boston and made possible in part by the Rhode Island Council for the Humanities. 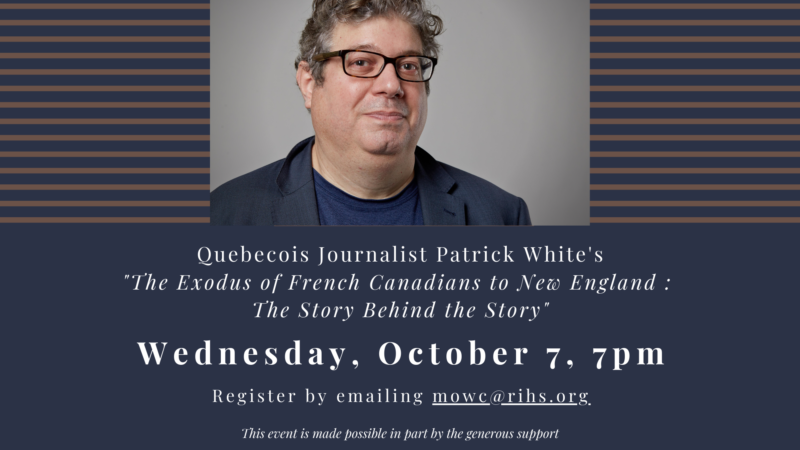