May is Declared Storm Drain Awareness Month in MA and RI 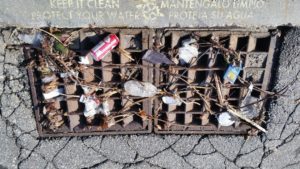 Whitinsville, MA (April 15, 2019)  – The month of May has a little more meaning this year in the Blackstone River Valley. By way of Gubernatorial Proclamations issued in both Massachusetts and Rhode Island, the month of May has been declared Storm Drain Awareness Month.

In the middle of planning for spring cleanup season, Bonnie Combs, marketing director at the Blackstone River Valley National Heritage Corridor (BHC), sought out to file Gubernatorial Proclamation requests both states to declare the month of May as Storm Drain Awareness Month. By mid-April she learned in the same week that both were reviewed and approved, fulfilling a long-term goal to create awareness about the role storm drains play in carrying litter and harmful pollutants to the waterways of the bi-state Blackstone River Watershed, and eventually to the bay and ocean.

“In 2015, BHC launched ‘Trash Responsibly,’ a program to create awareness about the impact litter has on our natural resources here in the Blackstone River Valley,” Combs explained. She is the organization’s marketing director and also manages the Trash Responsibly program. Combs works with the 25 communities of the National Heritage Corridor to plan and coordinate cleanup and recycling events, and over the years she has brought awareness to  fishing line and Styrofoam recycling programs. This year she decided was the year for storm drains.

For the first year of the Storm Drain Awareness Month campaign, Combs hopes that people will choose to adopt a storm drain on their street, in their neighborhood, in their town, or even where they work or go to school. “I’d love to see people choose a storm drain that they see often and pledge to keep it clean of litter and debris and be mindful of harmful pollutants that find their way to the drains,” Combs shared. “I’m hoping once people make the connection between what lands on the grates of the storm drains and how it and other pollutants wash down and end up in our rivers, streams and oceans, that they’ll want to help prevent that from happening. It will help protect local wildlife, improve water quality and eventually help prevent the spread of what is known as Plastic Ocean.”

For anyone looking to actively engage in the storm drain awareness campaign, Combs suggests selecting a storm drain and using the Google Maps feature to determine the GPS coordinates. “I’d love to receive photos and map info to track participation and support. I’d really like to see how far this campaign spreads and how much of an impact it can make.”

With the help of volunteers from BHC’s Volunteers-In-Parks program, educational programs are planned for Storm Drain Awareness Month utilizing the Enviroscape table-top watershed model, a hands-on, interactive activity that demonstrates the sources and effects of water pollution. “We have volunteers who are trained to present this program to school and community groups,” Combs explained. For anyone looking to learn more about the Enviroscape and receive training, a Volunteer Skills Workshop has been scheduled for Monday, May 6 at 6:30 p.m. at the Blackstone Heritage Corridor office, 670 Linwood Avenue, Whitinsville, MA. RSVP to Volunteer@BlackstoneHeritageCorridor.org. Additional water-quality education programs are being planned for Wednesday, May 15 at the Blackstone Heritage Corridor Visitor Center at Worcester, 3 Paul Clancy Way, Worcester, MA, at 4:00 p.m. and 6:00 p.m. To register and learn more, contact Bonnie Combs at bcombs@BlackstoneHeritageCorridor.org.

This storm drain awareness initiative was inspired by a particular storm drain she recalls walking by on the way to a meeting a few years ago to discuss plans for a recycling event. “It was a double-wide storm drain and it was covered with litter,” she remarked. “It was at a busy crosswalk and it was also stenciled in English and Spanish with the message ‘Keep It Clean – Protect Your Water.’ I snapped a photo and that image has stuck with me all these years.”

One year later, at an Earth Day cleanup, the Blackstone River Watershed Association was giving away “Dwayne the Storm Drain” coloring books produced by the Massachusetts Water Resources Authority (MWRA) and Combs brought a copy back to the office to add her to research. She later connected with MWRA’s School Program Coordinator and received shipments of the book for her own environmental programming. Earlier this spring, “Dwayne the Storm Drain” books were brought to the Green Team students at Taft Elementary School in Uxbridge, MA, for a reading and discussion about pollutants that impact water quality and how the students could help by adopting a storm drain in their neighborhood.

A couple of years ago, Combs also worked with the Blackstone River Watershed Association to borrow storm drain stencils for a volunteer project with a local church group looking to do community service. “I had contacted the Uxbridge Department of Public Works about stenciling a storm drain near my office that fed right into the Mumford River and they were very supportive,” Combs recalls. “The project was very eye-opening for many after we did the stenciling, we cleaned up the area where litter had washed into the river.”

After volunteering one year with Save the Bay on a storm drain marking project in Woonsocket, RI, which involved the application of round discs above the storm drain with epoxy glue, Combs received a box of the same discs from the Blackstone River Coalition and used them for a “Kids Trash Responsibly” program in Blackstone, MA, and Millville, MA.

This year, Combs requested that the organization’s annual application for the Narragansett Bay Commission’s Earth Day Grant be focused on storm drain marking supplies to help bring the program to more communities. In early April, BHC received word the grant was approved.

When seeking the proclamation request in Massachusetts, Combs reached out to State Representative David Muradian, who once helped her acquire one for Save the Frogs Day which is April 30 every year. In 2016, Combs had participated in Roger Williams Park Zoo’s citizen science project for monitoring frogs and worked with Rep. Muradian that spring on acquiring the Gubernatorial Proclamation. “I am happy to partner with Bonnie to bring awareness and education about this important issue,” stated Rep. David Muradian. “Storm Drain Awareness Month will serve as a reminder about the importance of reducing liter and pollution within our communities.”

In Rhode Island, she reached out to Senator Joshua Miller on the matter, who introduced a Senate Resolution declaring May as Storm Drain Awareness Month. Combs also worked with the Rhode Island Governor’s office on a Gubernatorial Proclamation.

For more information on the storm drain campaign, volunteer opportunities to assist with storm drain marking, and other Trash Responsibly initiatives, contact Bonnie Combs at bcombs@BlackstoneHeritageCorridor.org or call 508-234-4242.