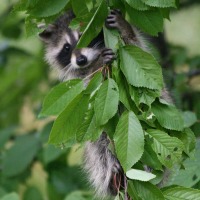 October 27, 2016 – The raccoon (Procyon lotor) was once very common throughout the Blackstone Valley but populations have declined in recent years due to the spread of rabies. While the raccoon adapts well to a wide range of habitats, it is most often seen in mature woodlands, along streams, near ponds and beside marshes. From these habitats, the raccoon finds a variety of food sources including frogs, crayfish, bird eggs, acorns and wild berries. Due to its adaptability to man-made changes in their habitat the raccoon also lives in close association with human developments. So their food sources now include those found in a human’s waste receptacle!

Raccoons have short pointed ears, long pointed snouts and grayish-brown fur covering the body that is between 22 and 26 inches long.  The most identifiable features are the black “mask” around the eyes and black “rings” around the long, bushy tail.  Raccoons can stand on their hind legs so they can investigate items held between their front paws.  Those paws are quite developed with five “fingers” that allow the critter to be very dexterous.  In fact, touch is the most important sense that a raccoon possesses and it is hyper-sensitive and extremely quick.  Raccoons are excellent climbers.  They can move forward or backwards on their way up a tree trunk and are one of only a few animals that can descend head first.

The face mask has assigned the raccoon a reputation for being a thief.  They possess great visual acuity, particularly night vision.  Zoologists suspect they are color blind although their eyes are good at picking out green light.  Raccoons have an especially keen sense of smell.

Raccoons will “den-up” for the coldest months of the year.  They are not true hibernators because during warm spells in the winter they will come out of their den to search for food.  They are not too particular about their dens and will use any suitable cavity, be it the hollow of a tree or someone’s attic!