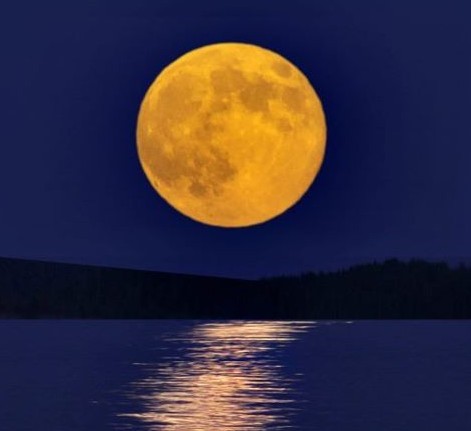 We enjoy another brilliant full moon tomorrow. Did you know that each full moon has one or more special names? We’ve included many of them in the new 2017 Blackstone Heritage Corridor Calendar (see Shop).

The names of the full moons in our calendar come from a long, long list and are derived from almost every cultural tradition – Colonial American, Native American (and even by tribal nations), Celtic, New Guinea and Medieval English. It’s the Wolf Moon in January, when the wolves are howling for mates, just not here in the Blackstone Valley. March has the Sap Moon, when the trees begin to wake up. The full Thunder Moon is July for obvious reasons. 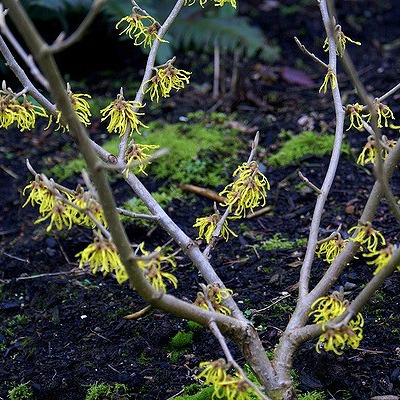 While all the blooms of late summer are nearly spent by mid to late September, there is one shrub just hitting its stride – witch hazel.  Witch hazel (Hamalemis virginiana) is a plant unique to New England, with its greatest concentration in Southern New England.

Witch hazel grows to a height of fifteen feet and prefers moist shade or semi-shade areas under hardwoods.  The leaves are deciduous, of oval shape with a distinct saw-tooth pattern around the outside edge.  The fruit ripens at the time the leaves are falling.  The brown, nut-like pods open in an explosive pop, sending the seeds forth onto the ground.

Throughout centuries witch hazel was used for divining rods, as its forked twigs were ready made for dowsing.  Medicinal uses proved to be more fact than fiction.  Native People used the bark for its healing qualities.  Today, its bark, twigs and leaves are distilled into an astringent and used for home remedies as well as an ingredient in medicines.

It is an interesting plant to look for when hiking the region’s trails this month. 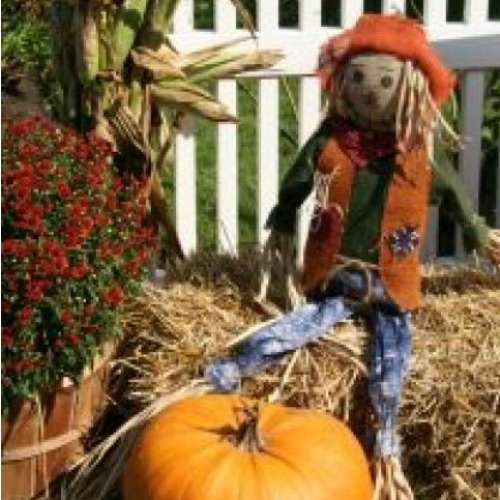 Once a decoy used to frighten hungry birds away from crops, the scarecrow has become an autumnal decoration.  They are everywhere, in every size and configuration.

The scarecrow has been with us for a long time – historians estimate 3,000 years ago Egyptian farmers created the first decoys of framed nets to eliminate the quail from feasting on wheat crops.  Over the centuries, the scarecrow evolved to its present human form as a selection of old clothes displayed on vertical and horizontal supports to resemble a standing man.  Loose clothes, scarves or other moveable parts aided in the deceit and keep the crows on their toes, so to speak.  While a scarecrow may work early in the season, crows aren’t stupid.  The lack of movement and absence of real threat is not lost on them and they quickly ignore the scarecrow, forcing most farmers to add elements to increase the threat level like aluminum pans, rattling gourds or wind-chime-like noisemakers.

I don’t know how a soldier in the war on crows became a symbol of harvest.  But if scarecrows remind people of where their food comes from, then they are a good thing. 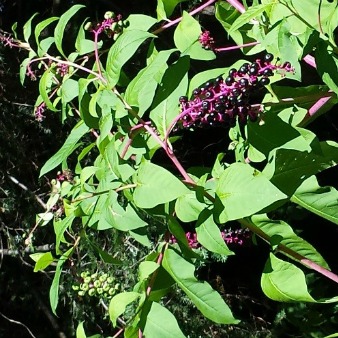 Written and performed by Tony Joe White, and other artists like Elvis, it describes the lifestyle of a poor country girl from the South.  Sally’s Polk Salad refers to the pokeberry plant, all parts of which are poisonous. Pokeberry has been used as a food staple in the southern states for years.  Experts at Medline Plus, a website of the National Institute of Health,  point out that even then there is no guarantee that pokeberry is safe to eat and they emphasis that the roots should never be eaten, as they contain the most toxins, Phytolaccatoxin and Phytolaccigenin.

It is easy to glimpse the tall colorful forms of pokeberry this time of year along roadsides or in the scrubby areas between field and forest in the Blackstone Heritage Corridor.  They are distinctive bushes with their long bunches of grape-like fruits.  Pokeberry is a dramatic perennial and native of most of the Americas; also called inkberry, pokeroot and pokeberry. Its botanical name Phytolacca Americana is derived from the Latin word, lacca, meaning “red dye,” an obvious fact is you have every gotten squished berries on hands or clothing.

The plant has redeeming features.   It is an attractive addition to a landscape of native plants.  The berries are usable as both an ink and dye.  They do provide a food supply to the wildlife in the Blackstone Heritage Corridor, ourselves excluded!

Whitinsville, MA – (September 6, 2016) – In celebration of its new 2017 Blackstone Heritage Corridor Calendar featuring the work of 10 local photographers, Blackstone Heritage Corridor, Inc. (BHC) is hosting a Calendar Release Party on Wednesday, October 19 from 6:00 p.m. to 7:30 p.m. at its offices at Linwood Mill, 670 Linwood Avenue, Whitinsville, MA. Guests can meet the photographers and purchase calendars on site.

“The emphasis of our 2017 Calendar is on our industrial heritage,” notes Charlene Perkins Cutler, executive director of BHC. The Calendar is “2017: The Innovative and Industrious Blackstone Heritage Corridor.” Carefully curated facts about the region’s contribution to the American Industrial Revolution punctuate the pages. On each month’s page, there are facts celebrating the innovation that had been fostered in the National Heritage Corridor from hundreds of years ago to the present. For instance, in the 1830s, the Knowlton Hat Factory in Upton, MA, was the largest manufacturer of straw hats in the world.

“The Blackstone Heritage Corridor is one of the Nation’s richest and best preserved repositories of landscapes, structures and sites that recall a neglected era of the American past:  the Age of Industry,” Cutler points out. “Thousands of structures and whole landscapes still exist which represent the entire history of the American Industrial Revolution and the complex economic and social relationships of the people who lived and worked here.”

The photos for the 2017 Blackstone Heritage Corridor Calendar where chosen in a blind contest and offer a mix of scenes showcasing the National Heritage Corridor’s natural, historical and cultural resources.

The new year begins with a beautiful snowy scene, taken late in the afternoon with the sky lit by stunning pink tones cast against what looks like a carefully hand-painted landscape. January’s photo was submitted by Frances Guevremont of Lincoln, RI, who revealed that the scene lasted only about 10 minutes as she photographing it. February follows with another snow-filled landscape taken along the canal tow path below the Ashton Dam in Quinville, RI. David Newton of Cumberland, RI, shared his photo that beckons one to cross the wooden bridge with snowshoes or cross country skis. Carol Dandrade of Uxbridge, MA, spent some time along the rail trail in Millbury, MA, and captured a reflection of a metal bridge that was cast onto the track. The picture offers a unique perspective that one might never see.

Cormier Woods, a property in Uxbridge, MA, preserved by Trustees of Reservations inspired Wendy A. Henschel of Linwood, MA, to pack a camera. She captured an historic homestead along the trail with beautiful stone work and complementary colors in the roof and wood siding. It sits in surrounded by lush landscape just calling out for spring. The month of May is ushered into the 2017 Blackstone Heritage Corridor Calendar with a captivating photo of two cygnets whose sudden movement cast a spiral around them, offering the light an opportunity to dance around the new creatures. Tiny beads of water on the swans make one think the calendar is wet. Ernest Berube of Lincoln, RI, captured May’s photo along the banks of the Blackstone River in Lincoln, RI. Further north in his hometown of Douglas, MA, Scott Harwood stopped along the Southern New England Trunkline Trail on Wallum Lake Road and zeroed in on aging stone arch bridge that beckons the admirer to continue on down the lush green path.

An iconic symbol of freedom, the American Bald Eagle, graces the page in July, submitted by Don McKenzie of Worcester, MA. Titled “Papa Bald Eagle Fishing in the Blackstone River,” the powerful image was taken in Riverdale, a village of Northbridge, MA. It is no secret that the Blackstone River offers photographers a wide variety of subjects. For the month of August, a photo submitted by Allan Siuzdak of Cumberland, RI, of a trio of painted turtles walking up a fallen log also captured their reflection being cast in the water below. With the sun shining off their backs, one can almost feel the August heat pulsing off the page. The golden hues of September inspired Wendy A. Henschel to submit a photo taken at River Bend Farm at Blackstone River & Canal Heritage State Park in Uxbridge, MA. Henschel captured a Fritillary butterfly resting with its wings wide open, appearing to be having a conversation with a nearby pencil dragonfly. River Bend Farm was also the scene for October’s picture taken by Robert William Mielke of Uxbridge, MA. Miekle spotted a picnicking couple enjoying the view of a stone arch bridge embellished with autumn color. Carol Dandrade visited the Hannaway Blacksmith Shop in Lincoln, RI, and submitted a vignette of blacksmith tools with a roaring fire in the background, appropriate to offer some warmth to November’s calendar picture with a nod to history. The month of December is celebrated with a picturesque winter scene of the Blackstone Canal at the Capt. Wilbur Kelly House Museum in Quinville, RI. David Newton captured the shot after a snow squall had moved on and the sun started to break through the clouds casting a reflection on the water below.

The coveted cover shot, “Pond Mist Sunrise,” was submitted by Leon Droby of Uxbridge, MA, at Voss Farm (River Bend Farm), also in Uxbridge. Standing near the shore looking at the tow path in the distance, Droby captured the daybreak with the sun’s citrus-colored hues reflecting into the canal through a layer of fog dancing above it. The barren trees are reflected in the canal creating a captivating photo at a very popular visitor location in the National Heritage Corridor.

“I look forward to this calendar contest every year because I get to see hundreds of photos that capture the uniqueness of the National Heritage Corridor,” Cutler explained. “They are all submitted by local photographers, and it’s always inspiring to see what they discover and choose to submit to help us tell our story through the months of the year. We are grateful for the passion and generosity.”

BHC’s 2017 Calendar will be available at the Calendar Release Party on October 17 and can be purchased for $10 each. The calendars will also be available for sale on BHC’s online shop. To learn more, visit BlackstoneHeritageCorridor.org.

The snapping turtle (Chelydra s.serpentine) is the largest freshwater turtle in Blackstone Heritage Corridor.  It can grow to over 18 inches in length and weigh more than 40 pounds.  The snapping turtle has a keen sense of smell and primarily eats fish, amphibians and other water creatures.  It has a greenish cast to its otherwise brown shell (carapace) due to algae growth.

Rarely seen on land, snapping turtles usually inhabit shallow lakes and streams with lots of plants.  When in water, the snapping turtle is shy of humans and will swim away quietly.  It will come onto land in June and July to lay eggs.  Since the underside of its body (plastron) is smaller than the carapace, the snapping turtle cannot protect itself by drawing completely into its shell.  Snapping turtles have a powerful, beak-like jaw with an agile neck and head.  So when it is out of water it can be dangerous.

Click here to read the article about GO! in the newest edition of The Valley Breeze!