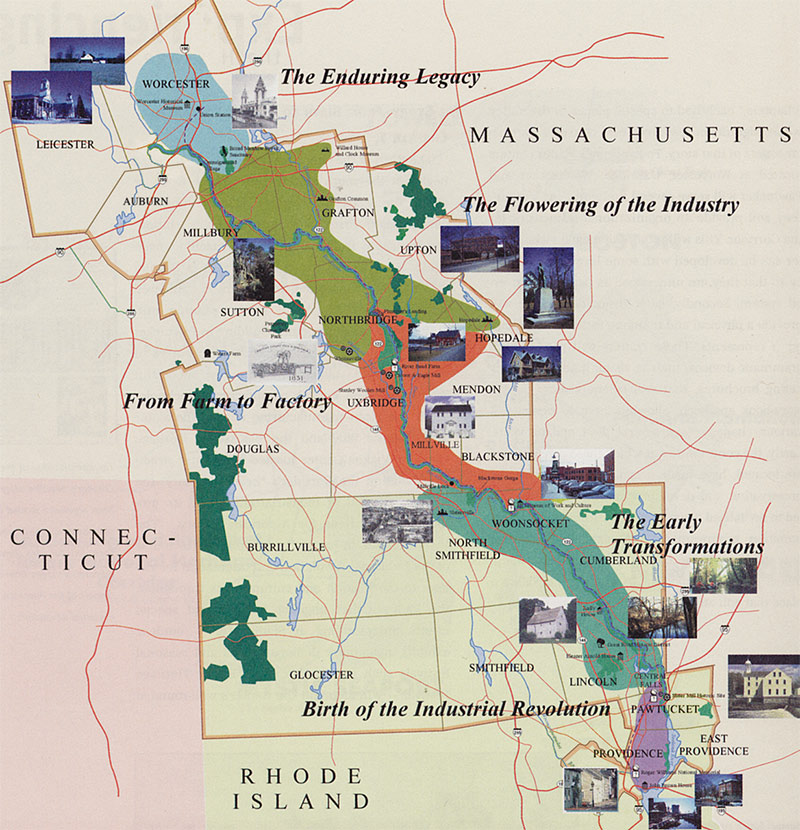 Blackstone Heritage Corridor welcomes visitors to the region and provides visitor services at many locations, along with interesting exhibits and films about some of the stories of this special place - especially the nationally-significant story of the rise of American industrialization.

What you'll discover along the way

Birth of the American Industrial Revolution is the story of Pawtucket, RI, where the seeds of technological innovation and capital wealth first took root with Samuel Slater's first-ever engineered cotton spinning mill.

The Early Transformations highlight the impact of industry on the primarily agricultural landscape of the Blackstone Valley. Following the development of Slater's Mill in Pawtucket, the physical form of the river valley was transformed to reflect how people lived. Their settlement patters, changing transportation systems, and cultural influences mirrored the change in focus from an agrarian society to one which relied on modernization, mills, and mechanization.

From Farm to Factory explores the change from an agricultural to an industrial economy. "The Early Transformation" describes the shift to mechanized society which functioned in terms of time clocks and production rates, "Farm to Factory" celebrates the continuing role of agriculture in this changing environment. Farmers now provided not only for their own families but for the mill-workers, as well. Additionally, the Blackstone Canal facilitated water-based transportation of raw materials and finished goods.

The Flowering of Industry details the height of southern New England textile manufacturing. During this period, the power of the Blackstone River supported the region's productivity in yarns and cloth, as well as finished goods, more so than any other place in the world. The paternalistic company town emerged during this period, notably the communities of Hopedale and Whitinsville, which still provide exceptional opportunities to learn and appreciate the historical significance of the economic, cultural, social, environmental, architectural and other effects of this time.

The Enduring Legacy celebrates the heritage and history from throughout the Valley: industrial and transportation history, immigration and our cultural legacy, man's impact on the environment, and innovation and invention. This period reflects the role of the public-private partnerships in advancing the textile industry through the later 19th century and into the 20th century. Part of this partnership was due to community-wide efforts to reclaim smaller manufacturing sites and convert them either to larger functioning mill complexes or to otherwise active and useful sports within the community.