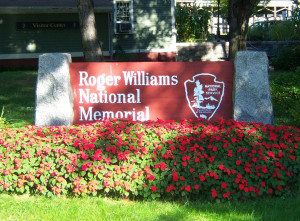 “Congress shall make no law respecting an establishment of religion, or prohibiting the free exercise thereof”. – First Amendment, U.S. Constitution

Through word and act, Roger Williams fought for the idea that religion must not be subject to regulation by the state – that it should be a matter of individual conscience. Americans take this for granted today, but most people of his time condemned such thoughts as naive and dangerous They believed that religious freedom and civil order could not coexist. Williams extended his defense of the individual conscience to American Indians, respecting their rights and condemning imposed Christianity. As founder of Rhode Island, he put his beliefs into practice, giving “shelter for persons distressed of conscience.” 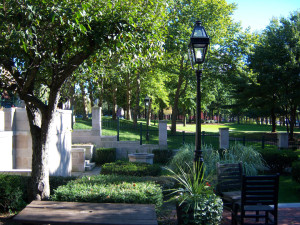 Roger Williams National Memorial, on 4.5 acres, is open seven days a week, 9 a.m. to 4:30 p.m. except Thanksgiving, December 25th, and January 1st. Free parking is available and the park is wheelchair accessible. Groups need to make arrangements in advance. Bernon Grove commemorates Gabriel Bernon, a 17th-century Huguenot who fled persecution in France and settled in Providence. He is buried across the street in St. John’s Cathedral which he helped found (was then known as King’s Church). The Hahn Memorial was built  on land donated in the name of the first Jewish citizen of Providence to hold elected office. In the visitor center is a small exhibit on the significance of Roger Williams’ life and ideas.