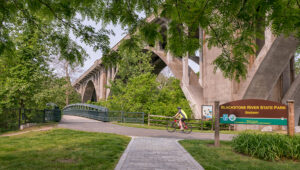 Help is urgently needed to move the long-sought Blackstone River Bikeway/Greenway project toward the finish line in both Massachusetts and Rhode Island to make this dream a reality!

In Massachusetts, where much of the pathway remains to be designed and built, there is a special opportunity for each of us to reach out to Governor Baker and state lawmakers to include bikeway projects in a pending capital outlay bond bill – House No. 4336. Please take a moment to contact state officials to include four projects in the bond bill.

In short, for an investment of less than one percent of the total proceeds from the bonds authorized by House Bill 4336, South Central Massachusetts residents and visitors could soon enjoy a substantially improved and expanded linear recreational facility!

In Rhode Island, Governor McKee and Valley legislators also need to make completing the Blackstone River Bikeway a top priority for the Department of Environmental Management (DEM). The project in Rhode Island is much further along than in neighboring Massachusetts, but there are still important gaps, including segments in Woonsocket that are critical to making the link to Massachusetts and, thus, adding additional miles to reach Worcester. Substantial federal dollars for infrastructure are now available to fund this initiative, so now is the time for concerted action.

Blackstone Valley residents on both sides of the state line have a great opportunity to call for their state governments to invest in new recreational and environmental resources that will enhance this region as the “Birthplace of America’s Industrial Revolution.”  Let our voices be heard!

To find your legislator in Massachusetts, visit https://malegislature.gov/search/findmylegislator.

To find your legislator in Rhode Island, visit https://vote.sos.ri.gov/Home/ElectedOfficials.

Join us out on the Bikeway/Greenway! We are hosting two events to recognize Rails-To-Trails Conservancy’s Celebrate Trails Day on Saturday, April 23rd! Bring your bike and come ride with us! We will also have an information tent where you can learn more about plans to extend the Bikeway/Greenway and learn about our Bikeway Ambassadors volunteer program.
Blackstone River Greenway in Blackstone, MA
10 a.m. to Noon
Blackstone River Greenway in Lincoln, RI
2 p.m. to 4 p.m.
Read Richard T. Moore’s Op-Ed in the March 7, 2022 edition of the Worcester Business Journal:
“Blackstone Bikeway is Worcester’s Emerald Trail” 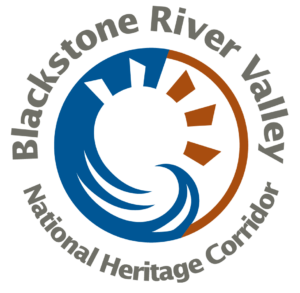