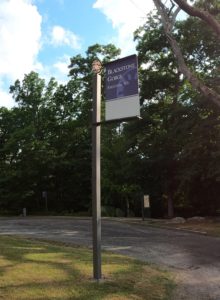 Follow signs off of Route 122 in Blackstone to the Blackstone Gorge on County Street in Blackstone. The put-in is a short walk from the parking area to just above the Rolling Dam (1886). The Rolling Dam is large and backs up a lot of water into a millpond that was used to power the Blackstone Manufacturing Company (1904) and currently provides water power for hydroelectricity. The river is wide here and paddlers are more susceptible to dealing with wind as an element, pushing the canoe or making you work really hard to get to your destination. This trip is not advised in high water. Check the water level before planning this trip – if there is a lot of water spilling over Rolling Dam do not attempt to put-in and paddle up-river. About one mile up river you pass under the “Triad Bridge” where three railroad lines were to cross at a point forming a three-tiered bridge. 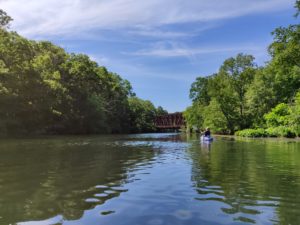 At about 1 1 ⁄2 miles (after the second P&W Railroad Bridge) look carefully on the left bank for the Millville Lock (1828) at the end of Hope Street. For the best view of the lock, pull out on river left and walk the 10 yards from the river bank to the lock. This is the best preserved lock on the Blackstone Canal. You can continue to paddle up stream to Central Street in Millville, just below the rapids that flow on your right under the bridge.
Just before the Central Street bridge is a 2-acre island that serves as a bridge support and divides the river. The island was the site of a succession of mills – a grist mill (1732), a sawmill (1753), and the first woolen mill (1814) in the Blackstone Valley, among others. The remains of the Stone Mill (1825), which burned in 1874, is the most visible part of the factory complex which grew up on the west bank of the river.
After exploring Millville, return to the Blackstone Gorge by paddling back downriver. A short distance above the Rolling Dam stay river right. The left channel provides water to power the hydro plant. The river is flat and wide back to the take-out just above Rolling Mill Dam at the entrance to the Blackstone Gorge at the end of County Street. Take out where you began on river left being cautious of the dam. 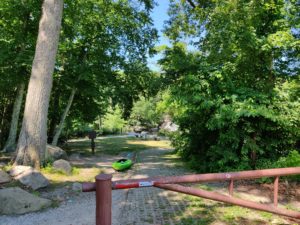 Suitable for all skill levels. 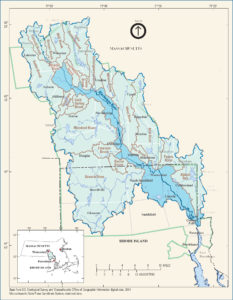